Greeting from the President 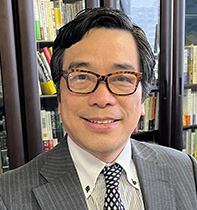 My Goals as the new AGI President

On July 1, 2022，I had the honor to be appointed as the President of the Asian Growth Research Institute
(AGI).

The International Centre for the Study of East Asian Development (ICSEAD), which was the predecessor of AGI, was established in September, 1989 as a joint research facility with the University of Pennsylvania in the United States. Since then, for 33 years, we have been investigating and studying economic and social issues of Kitakyushu, Japan, and Asia, while simultaneously continuing to make policy proposals for these regions.

In terms of contributions as an academic research institute, AGI has been playing the most remarkable role in Kyushu as an intellectual facility to offer findings of economic studies to the world. In addition, we have trained and provided many good researchers for universities nationwide, and have also been in charge of education at Kyushu University (Asian economy-related course of graduate school) and the University of Kitakyushu (Ph.D. program in International Development Policy field). Utilizing networks with universities, research institutions, researchers, etc. both in Japan and overseas that we have cultivated so far, we will further promote research on Asia, and at the same time, we will aim to foster better mutual understanding of Asia among local communities (business sectors, governments, and citizens), and develop high-level human resources in collaboration with local universities, etc.

Moreover, AGI clearly states in the new Medium-Term Plan (2021-2025) that we are “a Japan’s representative research institution on Asian studies with high concern on contributions to the local community,” and is further strengthening the function of a think tank. Contributions as a think tank include supporting Kitakyushu City in realizing its major projects from an academic perspective, conducting studies aimed at promoting Asia-related policies, and making proposals for promoting industrial development and economic growth in collaboration with local economic organizations and companies.

The world is going through a very difficult phase now. On the one hand, there are critical issues the world needs to come together to tackle, such as the declining birthrate and aging population, stagnant economic growth, environmental changes due to climate warming, and the epidemic of infectious diseases. These issues are becoming increasingly severe. At the same time, alarming frictions and conflicts such as regional conflicts and conflicts between major powers are on the rise, creating new challenges and many uncertainties for Asian economic growth and sustainable development. However, we believe that there are higher expectations for the role of AGI when such global issues are piled up.
I feel it must be some kind of fate that someone like myself, who was born in a different country, received the opportunity to take on the great responsibility of the AGI president in a time like this. I will try my best with a more global perspective, and disseminate timely research results and policy suggestions from our institute to the local city of Kitakyushu, to Asia, and to the world during this turbulent period.