Greeting from the Chairman 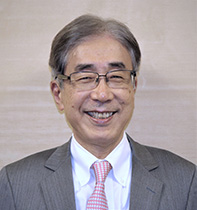 The International Centre for the Study of East Asian Development (ICSEAD) was established in 1989 with the aim of conducting surveys and research on East Asian economies and societies, financially sponsored by the City of Kitakyushu, the Fukuoka prefectural government, and business associations such as Keidanren. Its name was changed to the Asian Growth Research Institute (AGI) on October 1, 2014. The Institute is expected to contribute to both global society and the community of Kitakyushu by becoming a hub for a network of human resources in Asia through the promotion of academic exchange. Currently, its staff includes ten Ph.D. researchers of various nationalities including those from China, the US and Vietnam. Many of its Japanese researchers are fluent not only in English but also in various Asian languages. The Institute enjoys a steady influx of visiting researchers from various countries.

In the age of railroads, Kitakyushu City flourished as the gateway city to Kyushu. With the advent of the age of air travel, however, the role of gateway to Kyushu has been taken over by Fukuoka City, which has an ideally located airport. Consequently, large companies began locating their branches in Fukuoka rather than in Kitakyushu.

However, the Kitakyushu airport was established in 2006. It operates 24/7 and could potentially accommodate the longest runway in Kyushu, serving airlines travelling to Europe and the US. This development has enabled Kitakyushu to begin overcoming the disadvantage of inaccessibility.

In addition, Kitakyushu’s historical and institutional proximity to Asia as described below also represents a major advantage, and may serve as an engine that will drive the growth of the city forward.

First, through the Japan International Cooperation Agency’s (JICA) regional training center, Kitakyushu has been sharing with government officials from Asia’s emerging countries for more than 30 years its experience of formulating successful environmental policies to overcome some of the worst industrial pollution in Japan. Through this initiative, the city has developed a network of human resources all over the world, which is a valuable asset.

Second, companies located in Kitakyushu have embarked on procuring parts and components at low cost from Korea using a “seamless transportation system” whereby a wheeled container towed by a truck on roads in Korea can continue to be towed by another tractor unit on Japanese roads. It is believed that this system will be expanded to other East Asian countries. Moreover, Kitakyushu Airport operates 24/7, opening up the potential for increased freight transport links with other Asian countries.

Third, AGI, which was established ahead of the explosive development in Asia, has been actively undertaking research on Asia and has built up a network with social science researchers in other Asian countries.

Thus, such proximity to Asia will serve as an engine of growth for the Kitakyushu area in this “Era of Asia.” Against this backdrop, we believe that AGI can make significant contributions to Kitakyushu City, both directly and indirectly, by fulfilling the following roles:

The time has long passed since we learned only from the institutional reforms previously undertaken by Western countries. We need to grow together with other Asian countries and can no longer afford to regard them merely as trade partners.

We hope that by fulfilling the above-mentioned roles, AGI will attract greater attention from Asian research institutes and government agencies to our activities, thereby enhancing our network of researchers and policy makers in Asia.